For celebrities, going to the dentist isn’t just a case of getting the odd filling or scale and polish.

For many A-listers, for whom image is everything, a trip to the dentist is an important part of maintaining that perfect smile.

But you don’t have to be a celeb to enjoy the benefits of gleaming teeth. Here at Queen’s Gate Orthodontics, we use a range of orthodontic treatments, some of which have been known to be used by some of the world’s most famous faces.

Here are five celebs who have had their smiles transformed by orthodontics.

The pressure on celebrities to have a perfect smile is big enough no matter who you are, but when your parents decide to call you Smiley (or Miley for short), the pressure is that little bit greater!

Throughout her young life Miley used both lingual braces and veneers, but also recently had to have four deeply rooted molars and one other tooth pulled out along the way!

She even went as far as to share the aftermath (including the teeth themselves and her x-rays) on social media!

But according to TMZ, who spoke to a dental assistant who viewed the x-ray images, she could be facing even further work in the future!

The One Direction singer wore braces for almost 15 months between 2011 and 2013 to achieve the Hollywood smile he sports today.

Niall opted for clear fixed braces, so they were less visible than the average teenager, and he also had a little bit of whitening done, just to top it all off!

Much like Miley, Niall shared the impressive results on social media and you can see them for yourself in this article from the Daily Mail.

The Top Gun star waited until he was the tender age of 40 to have his teeth straightened.

He had one tooth removed so that the others would have the room to grow out straight and spaced out, before having them tuned up with some clear braces.

Considering he’s one of the world’s biggest movie stars, Tom had no qualms about flashing his braces for the cameras back when he had them in 2002.

Tom wore ceramic braces which aren’t entirely invisible, but as they’re clear, they blend into your teeth.

The Justin Bieber of today is a far cry from the fresh-faced youngster that stole the hearts of girls under a certain age back in the late 2000s.

So you’d be forgiven for forgetting that Biebs once sported braces to correct his smile when he was younger.

The singer used Invisalign which is almost completely invisible, and one of our most popular treatments.

Much like Justin Bieber, it’s easy to forget just how young Emma Watson was when she was cast in the Harry Potter films, and she has literally grown up on camera.

She wore braces for four months in 2005 when she was just 15, but unlike Bieber, Emma opted for the classical braces and has had beautiful straight teeth ever since.

But remember, these treatments aren’t just for the stars, so if you want to give your smile that extra bit of pizzazz, give us a call here at Queen’s Gate Orthodontics.

Posted on 24 May 2016 by Queens Gate Orthodontics

TO GET OUR FREE ARTICLE ON
‘HOW TO CHOOSE AN ORTHODONTIST’ 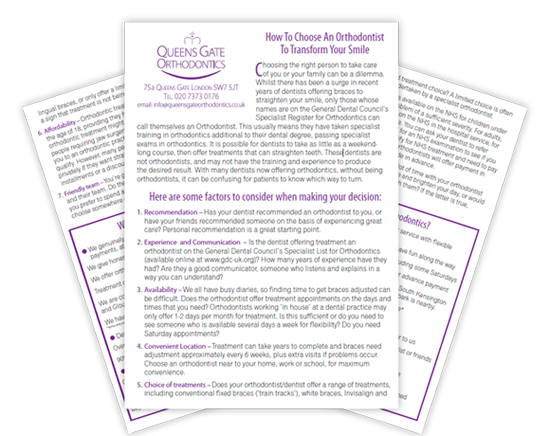